In need of full-backs in the summer, Napoli ended up purchasing Kevin Malcuit from Lille, but that doesn’t appear to have been enough.

The reason we say that is Il Mattino’s Tuesday edition, who claim the Serie A side are still on top of the situation for both Manchester United’s Matteo Darmian and Chelsea’s Davide Zappacosta.

All throughout the summer, the Italian pair were linked with moves away from their respective clubs, with the Stamford Bridge resident sent mostly to Inter, while the Red Devil was more touted for a Juventus move.

In the end, the duo remained in England, with Darmian far more annoyed about it than Zappacosta, and a wait until January is currently underway. 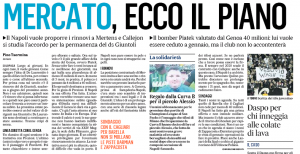 The former Torino star has barely featured under José Mourinho, and his Chelsea compatriot is in a similar situation under Maurizio Sarri, playing just six minutes of Premier League football this season.

Should one of the two move to Naples in the upcoming transfer window, Il Mattino make it very clear it would be via a loan, which means Manchester United would have to trigger Darmian’s extra year of contract or he’ll be free to go at the end of the temporary spell.

That’s not a worry for Zappacosta, whose deal at Chelsea keeps him there until 2021.