Liverpool signed Alisson Becker from AS Roma earlier in the transfer window and the Brazilian joins Loris Karius and Simon Mignolet as the Reds’ goalkeepers in the squad.

The German will be the understudy to the ex-Serie A stopper, while the former Sunderland man’s future now lies away from Anfield, as the media in Belgium have been reporting all summer.

Belgian newspaper Het Nieuwsblad claims the 30-year-old’s chances of staying at the club are now ‘very small’ as he has emerged as a transfer target for clubs in Turkey, and also Napoli, following an injury setback to summer signing Alex Meret.

This leave Carlo Ancelotti with Orestis Karnezis and Nikita Contini as the other two shot stoppers in the squad.

Napoli want to take Mignolet on loan, but the finances involved in the deal ‘scare’ them because Jurgen Klopp’s side are demanding a loan fee and also want the Gli Azzurri to pay his wages. 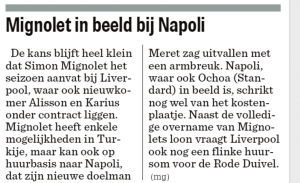