Ilkay Gündogan to Inter Milan is apparently a thing now, thanks to Corriere dello Sport in Italy.

The story was published in their Wednesday edition, and the newspaper firmly believe there’s a chance the Germany international could leave Manchester City in the coming months.

One of their reasons is the club’s current search for midfielders, with both Fred and Jorginho linked with a move to the Etihad, which they see as a suggestion someone other than Yaya Touré could leave.

There’s also the fact Gündogan has allegedly asked for a new contract, but hasn’t heard anything back from Manchester City yet, who are currently more focused on trying to find new players.

With all of this going on, Inter are said to be ‘on standby’, as they look to bolster their midfield this summer, aware that a player like the German could help take their squad to a new level. 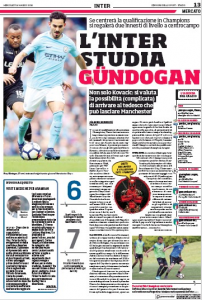 As things stand, a deal could rest on whether or not Inter make the Champions League, currently sitting 3 points behind Lazio with one game to go.

While that seems like a long shot, qualifying for the elite European competition would give a bit more money to play around with in the transfer window.

Should they decide to go for Gündogan, Corriere believe Inter would up his wage and offer around €40-50m to acquire his services.

The recurring injuries remain a worry, but there’s never been a doubt about the former Borussia Dortmund star’s ability with the ball in his feet, and his ability to remain fit for the entirety of the recent campaign is a sign the worst could be behind him.

This is the first we’ve seen of this, so we’ll be keeping an eye on it in case it becomes more than an idea in the coming weeks.