Roma are interested on a move for Everton striker Moise Kean in the January transfer window as they look to ease the burden on Edin Džeko.

The Bosnian is the Serie A sides top goalscorer this season with six goals in all competitions to date but is ploughing a lone furrow, with fellow forwards Justin Kluivert, Nikola Kalinić and Cengiz Ünder only managing five goals between them.

It’s led the Serie A side to seek reinforcements during the January transfer window and Kean is at the top of their wishlist, according to Gazzetta Dello Sport.

The 19-year-old arrived at Everton in a £25m deal this summer but is yet to manage a goal in 11 games for the club.

He was also recently fined for turning up to a team meeting late, the second time he’s had such an incident in his career, sparking fears he is not settled on Merseyside.

Roma, who were interested in the summer but beaten to his signature by Everton, are looking to take advantage of that.

Gazzetta explain that because Kean ‘continues to chew hard bread’ in England, they are hoping to tempt him to return to his homeland.

A limited budget means they cannot afford to go ‘crazy’, so instead of a permanent deal, they will try to secure him on loan with a view to buy. 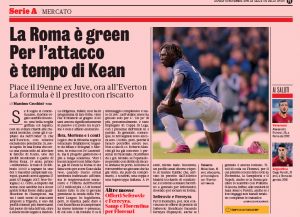 How Everton would receive such an offer is not mentioned, but it’s easy to assume it will be dismissed out of hand.

While Kean has struggled, the reports coming out of the club about him are positive, and it seems unlikely they would be willing to give up quite so soon after working so hard to get him in the first place.

Of course, Kean’s agent Mino Raiola is likely to have something to say, but for now, it’s unlikely Kean will be leaving Everton any time soon.

Left-back ‘arouses the interest’ of both West Ham and Crystal Palace...

Manchester City player ‘brooding’ over transfer – And frustration grows over...

Club ‘convinced’ Tottenham will make ‘one last offensive’ for striker –...