The Portuguese media has this morning been full of stories about Tottenham Hotspur’s pursuit of Sporting midfielder João Palhinha. They all explain this won’t be an easy saga, as Spurs must make a convincing bid to take such an important player from the Lions.

Now it turns out that the Lisbon side are in need of making money, and must look for other assets who could be involved in negotiations this summer. One of them seems to be Matheus Nunes.

The Brazilian has been linked to Everton for a few months now, and a couple of outlets today point him out as the player who could be useful for Sporting in this transfer window.

Newspaper Record features a story explaining why selling Nunes would be a better move for the Lions than losing Palhinha, as the club would have ‘less headaches’ on a sporting level. 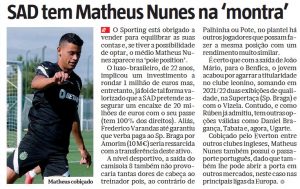 Record points out that Everton are, ‘among other clubs’, one of those interested in the player. They say Sporting would like to make €20m with his sale.

Meanwhile, newspaper O Jogo says Nunes is ‘wanted in England, and ‘the main interested’ club, Everton, must sell first and only invest later. That’s something that had already been reported by the Portuguese media, with local outlets really believing that the Goodison Park can’t afford the €20m move for now.

Should Everton not move for Nunes, and Tottenham actually do go for Palhinha, then it will put more pressure on Sporting to sell the latter.