Despite repeat claims from Mexico pushing Wolves to the front of the queue, Edson Alvarez is on the verge of joining Ajax.

The defender’s current club, America, had been pushing for a s high a fee as possible, which looked like it could favour Nuno Espirito Santo’s side. There was also some excitement in Mexico because of how well Raul Jimenez has done since he moved to Wolves.

De Telegraaf report Ajax have pushed ahead and agreed to pay America just over €15m. Now things need to be put on paper by the respective legal teams, and then Alvarez can travel to the Netherlands. 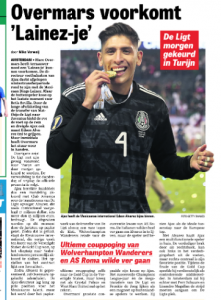 There’s a lot of Ajax confidence on this one, and the Dutch newspaper say the completion of the transfer ‘seems like a formality’.

Matthijs de Ligt is set to be confirmed as a Juventus player, and that gives Ajax even more cash to play around with.