Manchester City released Willy Caballero at the end of the 2016/17 season and the goalkeeper joined Chelsea as a free agent that summer.

The 38-year-old has been second-choice goalkeeper at Stamford Bridge and his appearances have largely been restricted to cup competitions.

Spanish newspaper AS interviewed the South American and asked how his life is at the west London club. He said: “Very good. Enjoying it at Chelsea and with my family. I have been fortunate to be playing for many years in great teams.”

His contract with the Europa League winners expires in 2020, meaning he could join any club on a free transfer after this campaign, if Chelsea decide against offering him an extension.

Caballero had spells at Elche and Malaga in Spain before moving to England.

The custodian was questioned if he will consider moving back to Spain or return to Argentina after this season, Caballero responded: “I end the contract at the end of the season and we’ll see what happens in the future.

“I do not have to return to Argentina because I feel more like a European player. Here I came very young and I left my country at 22.” 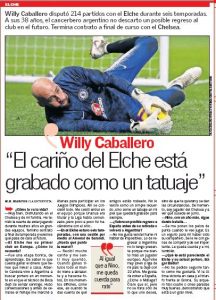 “I would like to return to Spain. Elche or Malaga? Of course, but it’s not just about what you want, it’s about [the clubs] wanting you and giving you the circumstances.”

“At the moment, I’m a Chelsea player and will see what happens in June.”