On Tuesday, we covered a story from Tuttosport saying that Everton could have problems in case they take too long to go for William Carvalho.

The article from the Italian outlet claimed Juventus have been following the midfielder for a while, and in case he does well against the Old Lady tonight, they could be convinced to bid for him.

Added to recent reports which claimed that Carvalho has been negotiating a new contract, now with a release clause of €60m, it sounded like things were only getting more difficult for Everton, whose interest was revealed this week. 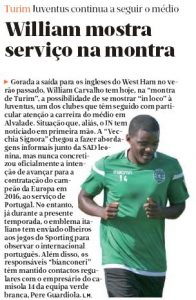 Now Jornal de Notícias is backing up Tuttosport’s info, saying that Juve have been in contact with William Carvalho’s agent Pere Guardiola for a while, and a bid could be made in case of a good performance from the midfielder tonight.

One interesting thing is that since the news were broken in the weekend, the Portuguese press has gone absolutely quiet regarding Everton’s interest.

Record, who published the story, didn’t have any other updates, and the other big outlets don’t even mention it.

Of course the local papers won’t be revealing all of the Toffees’ steps on the chase, but it’s curious how the Premier League side don’t even get a mention in stories like these.