Towards the end of last week, L’Equipe had pretty extensive coverage of the Thomas Lemar situation after multiple reports of bids from Arsenal for the France international.

The French newspaper claimed the Gunners had made a bid of €40m + bonuses, while Tottenham were ‘preparing an offer’ for him.

Well, that still appears to be the case, according to Nice-Matin on Thursday, with Arsenal, Liverpool and Tottenham expected to make contact with Monaco with offers soon.

The inclusion of Arsenal here would suggest another bid is on the horizon, having already had bids for the player rejected.

As for whether the Ligue 1 side are interested to sell, well, the line seems to be they don’t for now, but an exit isn’t to be fully ruled out. 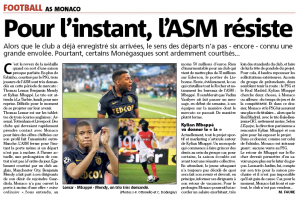 While this was all in L’Equipe’s article too, Nice-Matin do go against their national counterparts by stating no contract renewal for Lemar is in the works.

So, this would suggest they’ve got their own information, and while a lot of it corroborates with L’Equipe’s information, they’re clearly not just relaying what has been said previously.

Considering Lemar has a contract until 2020, there is no rush in that department, and unless the player really forces a move (he doesn’t seem the type to do so), they won’t have to sell if they don’t want to.

It seems Tottenham genuinely are after Lemar in some shape or form, while the addition of Jürgen Klopp’s side seems a bit forced, considering they’ve just spent next to £40m on Mohamed Salah, and already have the likes of Adam Lallana and Sadio Mané in their squad.

Still, it never hurts to have too many options.