On Wednesday, we briefly covered West Ham’s interest in Jordan Lukaku, hidden within an article about the Hammers’ negotiations with Lazio for Felipe Anderson.

Within that same story, it was also mentioned that Southampton were thinking about the Belgium international, who appears to be on his way out of Lazio this summer.

On Thursday, Il Tempo now have a story on the matter, corroborating their counterpart’s information about Southampton, but while they don’t mention West Ham, they do include Leicester City.

The younger Lukaku brother can play either as a left-back or as a left midfielder in a three at the back formation, but wasn’t Simone Inzaghi’s first choice last year, as the Italian manager preferred Senad Lulic to the Belgian. 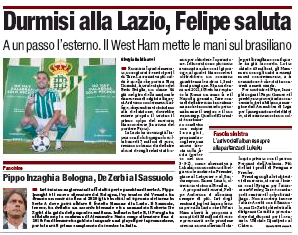 We’ll have to see where this goes, but if the desire is there, alongside the interest, and Lazio aren’t too bothered to let him go, we don’t see why this wouldn’t happen this summer.