Earlier today we relayed the news from Italy that Leeds United were interested in Michael Folorunsho, currently playing for Francavilla in Serie C.

Marcelo Bielsa’s side were said to be ‘in pole’ to sign the 21-year-old from Italy’s third-tier, and this news has been corroborated by Gazzetta dello Sport, who state the Championship side are in the ‘front row’.

A central midfielder, the Rome born player scored seven goals and picked up an assist in 31 league games this season for Virtus Francavilla Calcio.

Folorunsho is a former Lazio youth team product, swapping the Serie A side for his current club back in 2017 after starting his career with Sadio Calcio. 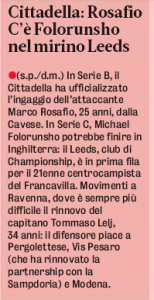 Details about the cost have yet to filter, but considering the size of the club Leeds United are looking to buy from, we doubt it’ll be the most expensive arrival at Elland Road this summer.

The report from Tutto Calcio Pugia hinted this might be coming from Andrea Radrizzani’s contacts rather than Victor Orta.