We always give credit where credit is due, and Foot Mercato have to be praised for their information concerning Tottenham’s interest in Alassane Pléa.

The French website surprised everyone last week by reporting Spurs had put in a €25m bid for the OGC Nice forward, which we covered here.

A few days later, TF1 gave their own slant on the subject, explaining things hadn’t quite got that far, but still confirming Tottenham’s interest in the 25-year-old.

Well, fast forward to Wednesday, and RMC Sport have confirmed Foot Mercato’s claim of a bid by reporting on their live blog that Daniel Levy’s club have indeed put in a €26m bid for Pléa. 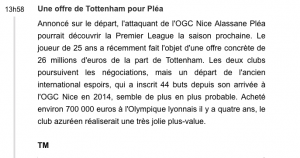 The French outlet state the two clubs are currently still negotiating the deal, but that an exit for the Nice player is looking ‘more and more likely’.

Bought for only €700k back in 2014, Pléa’s sale at that price would, as RMC Sport put it, be a great ‘plus value’ for the Ligue 1 side, who seem happy to sell both the Frenchman and Mario Balotelli this summer, with the latter said to be in talks with Olympique de Marseille.

Foot Mercato explained last week that Pléa was a plan B for Anthony Martial, who would be Mauricio Pochettino’s first choice, but Manchester United’s reluctance to sell their prized asset, much to the player’s discontent, appears to have forced them to turn to their backup plan.

Aston Villa’s offer for Gerrard’s target has ‘arrived’ – Club ‘not...

West Have have ‘returned to the charge’ for signing – Hammers...