Earlier on Monday, we covered a story suggesting Lazio’s Wallace was very close to a move to Wolverhampton Wanderers.

The Brazilian centre-back was supposedly being relocated by Jorge Mendes to Molineux, as Il Tempo claimed a €4m + €2m in bonuses deal.

This came after two previous claims (one from last summer and the last one in January) hinted the Portuguese super agent had already tried to create this move in the past, to no avail.

However, third time really is the charm, it seems, as Il Messaggero also cover it, although their information is a bit different. 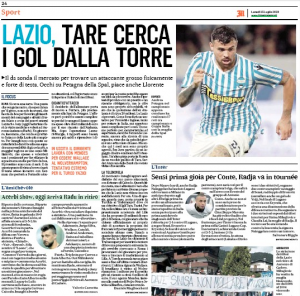 Wallace is still on his way to Wolves (they say he’s ‘close’), but instead of a permanent transfer straight away, the Lazio player will arrive in England on an initial paid loan of €1m followed by a view to buy at around €6m.

This makes the deal a bit more expensive than what Il Tempo suggested, but there isn’t any indication (at least not yet) of the option to purchase the player being compulsory.

Two local newspapers reporting a deal involving one of their two home clubs? As the saying goes, there’s no smoke without fire.