It’s weird how the brain works sometimes, but on Monday, as soon as we read from Il Mattino that Napoli would accept a bid for Faouzi Ghoulam should the offer reach €35m, something felt wrong.

Straight away, we delved into the archives and it hit us: the Naples based newspaper have, all of a sudden, changed their tune about the Serie A club’s asking price.

Back in February, we praised Il Mattino for the consistency in their reporting (which is rare in the transfer rumour mill), claiming it would take around €50m for a top club, like Manchester United, to convince Napoli to let him go because of his ‘variable’ release clause.

That has now dropped to €35m, which falls in line with what Corriere dello Sport were reporting last week, suggesting a €38m offer before June 30th would do the trick (after that the clause increases to €48m). 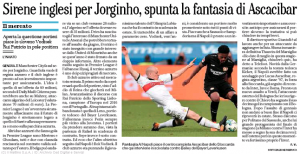 It’s also worth pointing out that soon after the February article, Ghoulam fractured his kneecap while recovering from a ligament injury in his knee, which could have affected his stock a bit.

Either way, Il Mattino do continue with their angle that Manchester United are the favourites to sign him, having followed him with ‘great interest’ over time.

With both Corriere dello Sport and Il Mattino now saying Ghoulam is available for less than €40m, it seems Napoli are now aware they might not get as much as they once thought following the Benjamin Mendy and Kyle Walker transfers last year.