Wednesday saw the emergence of a rumour few were expecting: Wojciech Szczesny to Napoli.

The Poland international has spent the past two seasons on loan at Roma, and with few prospects left for him at Arsenal, the goalkeeper is likely to be looking for a new permanent club over the summer.

Il Messaggero on Wednesday were the ones to report the initial story, claiming Napoli were currently trying to find out what Arsenal’s intentions were and how much Wenger would be asking for his former protégé. 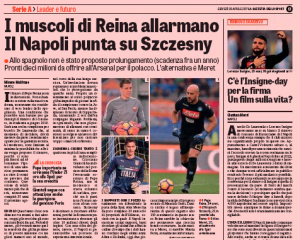 Well, Gazzetta dello Sport on Thursday have their own version.

The Italian newspaper explain that Szczesny is indeed a target for Napoli, who are worried about how long Pepe Reina (34) can realistically play at the highest level, and bringing in a younger goalkeeper is one of their plans in the summer.

However, they also make it clear the Arsenal loanee is just an idea for now, with no contact between the two clubs taking place as of yet.

While Roma are unwilling to spend the €10m the Gunners are asking for Szczesny, Napoli know that were they to match those demands, they would guarantee having a goalkeeper with international experience between their sticks for the foreseeable future.

Our bet is it won’t take long for this ‘idea’ to become something real.