Despite all the physical issues endured over the past couple of years, Nicolò Zaniolo remains a wanted man around Europe, such is his potential.

The Italy international was reportedly a target for Tottenham back in the days when José Mourinho was still in charge, and with the Portuguese manager now at AS Roma, you would think he would be thrilled at the idea of working with him.

However, following the bad run of results the club have endured over the past few weeks (two wins in their last eight games), Mourinho has had to adapt and move away from a formation where Zaniolo can be used in his natural position.

Il Tempo look at the situation at the moment, explaining the only way the young Italian would fit in is up front, which isn’t ideal.

Despite all this, the newspaper make it clear he remains a ‘pillar of the future’ for the club, and the idea would be to renew his contract, even if his contract currently runs until 2024. 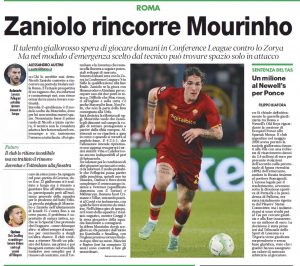 However, they also have to make sure he doesn’t get tempted by ideas elsewhere, as they point out that both Tottenham and Juventus are ‘at the window’ for the talented playmaker, as they await ‘developments in the transfer window’.

To us, that sounds like Fabio Paratici is circling around Zaniolo in hope he can bring him to the Premier League in the near future.

This all comes on the same day that Quotidiano claimed the transfer would ‘greatly enrich’ Tottenham, with Antonio Conte him wanting him specifically.