Nacer Chadli sealed a late move to AS Monaco from West Bromwich Albion on August 30th.

Since joining the new club the 29-year-old has made two starts in the league and has struggled to impress so far. He was withdrawn after the first half against Angers midweek as Les Monegasques suffered a 1-0 defeat.

French newspaper L’Equipe branded the former Tottenham Hotspur man a ‘flop’ and rated him 2/10 for his performance during the last outing, and Friday’s edition of the same publication has an explanation for the reason behind the attacker’s poor form.

Chadli made it to the Belgium squad for the 2018 World Cup – where he made six appearances – despite not featuring regularly for the Baggies last season. 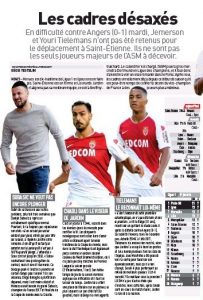 He started only twice and played for 216 minutes in the Premier League in the 2017/18 campaign and the report claims that while Monaco are happy to have someone in their ranks who came third in a World Cup, certain staff members still see him as someone who formerly played ‘second fiddle’ at the English club last season.

L’Equipe suggests the Ligue 1 outfit should give their player more time so that he regains his form for Leonardo Jardim’s side, as his lack of game time last season is the reason why they think he’s having some ‘difficulties’.