Home Premier League Burnley Sean Dyche discusses why he has so few foreigners in his squad...
SHARE

Can they do it on a cold, Tuesday night in Stoke? That’s the question many jokingly ask when they look at whether a player is truly special.

It’s rubbish, of course, because Lionel Messi will never go through that experience and everyone seems to think he’s the best there ever has been, yet the British weather remains a problem for managers and players alike.

We’ve lost count of the amount of times footballers have bemoaned Burnley’s or Newcastle’s weather, and it’s something that managers, like Sean Dyche, have to think about when building a team.

He said, speaking to So Foot: “It’s funny, but we take it into account, it’s true. It’s cold in Burnley and it’s not always simple. When it rains, it’s quite something… When we signed Steven Defour, we talked about it. He told me it wasn’t an issue because it rains a fair bit in Belgium. 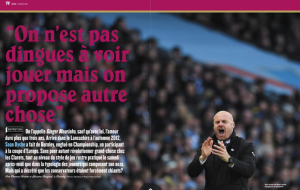 “We take it into consideration because we can’t afford to have a player take 18 months to adapt… Manchester City can, we can’t, it’s impossible. When we put money into a player, we need to use them as quickly as possible.”

With one of the most British squads in the Premier League at his disposal, the Clarets’ manager explained why his team is comprised of mostly ‘local’ (on a national level) players, unlike the vast array of foreign talent his competition have at their disposal.

Asked if he was preparing the first ‘post-Brexit’ team, he said, smiling: “No, it’s simpler than that. These days, our scouting team essentially works in Europe because it’s complicated to cast a wider net. For that, you’d need more financial and human power.

“I can’t simply work with surface information, so we focus on a restricted geographical zone. Honestly, I don’t really care where my players come from. If one day I feel like six French players deserve to wear a Burnley shirt, I’d take them, no problem.”

He might not be planning for Brexit, but if the United Kingdom’s exit from the European Union does end up causing problems for Premier League teams, it’s fair to say Sean Dyche won’t be too worried going forward.