It’s been a rollercoaster of a few days for Rangers fans, as claims in the English press suggested the tax bill leading to their club’s liquidation in 2011 had been hugely inflated by £50m, which led to many questions of whether the club could have survived had it been of £20m instead of £70m.

HMRC quickly hit back, ensuring no such mistake had been made, yet the seed of doubt appears to have spread in Europe to the point where France Football felt the need to ask Madjid Bougherra about it.

The retired centre-back didn’t hold back: “It’s a scandal! They’ve hurt a mythical club and also the Scottish league, because Rangers are an attraction. I hope justice will prevail”.

The 37-year-old explained this news ‘could only help’ and he hoped the club ‘could win back some money’ from the whole thing were it proved to be true.

The current manager of Fujairah SC in the UAE spent three years at Ibrox between 2008 and 2011, developing a special affinity for Rangers and everything around it, and admitted he has kept tabs on his former side throughout his career. 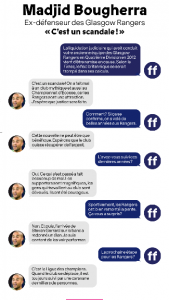 He said: “Yes, I’ve followed them. What happened hurt a lot. The fans are incredible. Those who work at the club are dedicated. They were brave. I’m not surprised by what happened, and Steven Gerrard’s arrival on the bench gave a boost. I’m glad to see them perform”.

As for the next step, Bougherra wants to see Rangers where they once belonged: the Champions League.

For that, they’ll need to win the Scottish Premiership, which they are fighting for, currently sitting second, joint on points with leaders (by goal difference) and fierce rivals Celtic.