The amount of coverage the Italian media is giving to Newcastle United is currently verging on being ridiculous.

All the sports newspapers, of which there are quite a few, have rumours about potential Magpies signings in January and through to the summer, and even the regional media is getting involved.

Il Mattino, which is the local newspaper for the Naples region, has an article on the future of Lorenzo Insigne. The Italy international’s contract with Napoli expires at the end of the current season, and the club captain has been in difficult talks over a renewal.

His representatives are in a battle of wills with club president Aurelio De Laurentiis, and, as in all things Napoli, there’s either a chance of a happy ending or a hugely dramatic parting.

Il Mattino start by focusing on the temptation of a move to MLS for the 30-year-old, should he leave next summer as a free agent. Then it’s stated ‘Saudi emissaries of Newcastle’ are thought to have ‘targeted the captain’ but there’s been no contact from them yet. 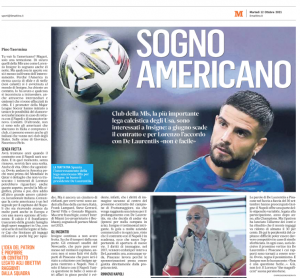 Insigne leaving Italy feels unlikely, and Newcastle would be a step down right now. That said, if MLS is even being considered then surely the Magpies would be too.

As it stands, everyone dragged into the mix is just a character in a play which currently concentrates on the theatre surrounding a renewal.