Chelsea are reportedly one of the clubs interested in signing Brazilian youngster Giovanni Manson Ribeiro.

The 17-year-old has his contract with Santos expiring in January, and the Blues are said to be along with Ajax in the race to land him.

The information is published on Twitter by Roberto Suehiro. He’s not a journalist, but follows the club daily and is often on the money. Many times, he brings accurate information long before the local media.

Giovanni is currently under an academy contract, which expires in January 2020, when he turns 18. Santos have the priority to offer him a professional deal, and in case he doesn’t accept it, it’s reported the club would have to be compensated with up to 200 times what they’ve spent to keep him in the past three years. 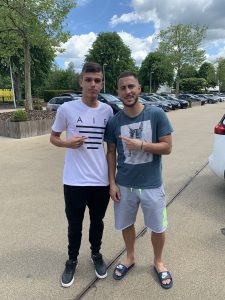 Giovanni has visited Chelsea this week, having posted a picture with Eden Hazard on Twitter. At the weekend, Gazeta Esportiva heard from one of his agents that even though he was close on joining Ajax, there was no agreement since he got an offer from an English club.

The midfielder is represented by Giuliano Bertolucci, who’s been involved in several Premier League deals for Brazilians, especially those with Chelsea.