In July, Sky Sports claimed, according to their own sources, Southampton had kicked off talks to sign Luciano Vietto from Atletico Madrid.

That was covered more widely, but things went quiet quickly. That could change, because, if the original claims were correct, Southampton could be about to get the player handed to them on a plate.

It’s explained that several clubs, with Valencia, Marseille, and Sampdoria, named alongside Southampton, have made loan approaches, but Atletico want a full sale.

Vietto would be available for less than the €20m Atletico paid Villarreal for the Argentine forward, which presents a reasonable transfer opportunity for Southampton.

It must be considered there’s a reason Vietto is being sold. The 23 year old spent last 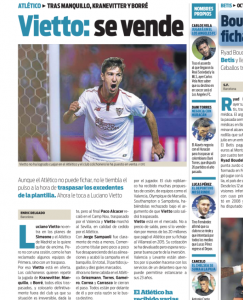 season on loan at Sevilla and failed to excel enough to attract a queue of clubs knocking Atleti’s door down.

Despite the club being in a transfer registration ban, they’re still happy, and eager, to see Vietto leave the club.