On Friday, we relayed the news from Belgium that Liverpool’s Lazar Markovic wasn’t exactly ready to play first-team football at Anderlecht just yet.

The Serbian winger was sent to the Jupiler Pro League side on loan on transfer deadline day as the club were looking for a forward, preferably a striker.

Short of options in that department, they appeared to settle on the Liverpool man, but his fitness levels weren’t great, and he was sent to do extra work by the club’s manager Hein Vanhaezebrouck.

The problem was Markovic didn’t feel like he needed it, and there were claims he wouldn’t be ready for at least five to six weeks. 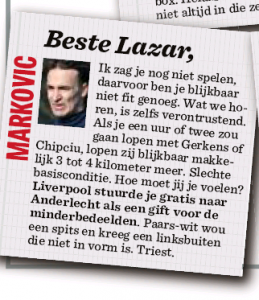 Anderlecht haven’t exactly been great this season, and off the back of yet another poor result (a 2-0 loss to Ostende), Het Nieuwsblad have taken it upon themselves to send a personalised message to each player in the team in their Monday edition to try and give them a kick up the backside.

Considering the Liverpool loanee has yet to play for them, there wasn’t a lot for them to say, but that doesn’t mean he escaped criticism.

They wrote: “Dear Lazar, I have not seen you play yet as you are apparently not fit enough. What we hear is even more disturbing. If you were to walk for an hour or two with Gerkens or Chipciu, they would apparently walk three to four kilometres more.

“Poor basic conditions. How should you feel? Liverpool sent you free to Anderlecht as a gift for the less fortunate. Anderlecht wanted a striker and got a left winger who isn’t in shape. Sad”.