While the whole footballing world took that Cesc Fabregas quote from his interview with Nice-Matin and went to town on it, it’s worth pointing out the Spanish midfielder said a few other things during his chat with the French newspaper.

One of the topics discussed was that of his exit from Chelsea, as the veteran playmaker left the Premier League for the second time of his career to team up with then Monaco manager and former Arsenal teammate Thierry Henry.

He said: “I was at the same time sad to leave London and the Premier League because that’s ten years of my life, but also very excited at the idea of discovering a new challenge, most likely the hardest of my career.”

Despite the 41-year-old being sacked a few weeks later, Fabregas remained in the principality club’s first-team under Leonardo Jardim, bringing much needed experience to a largely young squad. 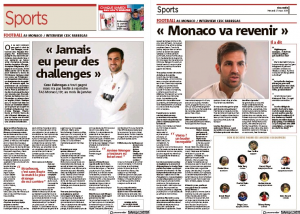 Starting and finishing eight from a possible 11 games since his free transfer to the Mediterranean coast, the Spain international will have three years left on his contract come the end of the season.

If all goes to plan, he will probably retire there, and there’s worse places to do so than the principality.