Matthijs de Ligt and Frenkie de Jong of Ajax has been linked with several top clubs across Europe.

The Catalan media have been regularly talking about either of the two players and on some occasions, both.

The latter is the case on the back page of today’s Mundo Deportivo where they talk about a particular interest from Bayern Munich to sign the duo for €150m.

Some clubs may prefer the defender, while other potential suitors may be interested in the midfielder, but the Bundesliga winners are after the two Netherlands internationals.

Journalist Miguel Rico mentions both the Eredivisie stars would suit Barcelona, but making an approach for them means a ‘sacrifice in the form of transfers’ by allowing a few of their players leave, including one or more regulars at the Camp Nou.

The Catalan club are in the process of remodelling the stadium and, with that in mind, to spend big on players and handing them contracts will be a ‘huge challenge’. 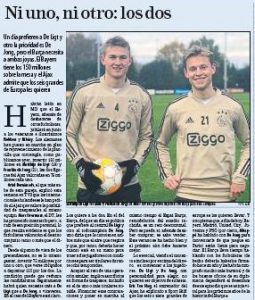 Even if Barca manage to raise funds from the sale of their players, it doesn’t mean they can sign De Ligt and De Jong from the Amsterdam-based club because of the tough competition they will face.

It’s not suggested who could be allowed to leave, and that’s where the issue would likely come.