The Portuguese media continues ruling out Felipe Anderson’s chances of moving to a new club in the January transfer window.

It’s recently been claimed by the Italian press that Fiorentina are interested in the player, and could work on getting a loan spell from West Ham this month.

Now as Portuguese newspaper O Jogo covers the news today, they are quick to respond to it saying it’s unlikely he’ll go anywhere.

The outlet claims that despite having played little in the first half of the season, Felipe Anderson ‘should stay at the Dragons until the end of the loan’. 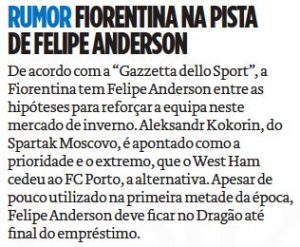 Earlier this week, O Jogo had already featured a big story saying Felipe Anderson is managing to have a good recovery and should have a lot more chances in the second part of the season.

So unless West Ham try to interfere and move him somewhere else, it’s looking unlikely he’ll leave the Portuguese side before the end of the loan spell.

The Brazilian’s contract with the Hammers runs until 2022.