Home Championship Ruben Neves on Wolves differences, and Diogo Jota on how good it...
SHARE

Since captaining Porto in a Champions League game at the age of 18, Ruben Neves has always deserved some special attention from the Portuguese media.

The midfielder has been around for quite a few years now, so when Portugal’s youth teams are playing, he’s the one in the spotlight.

Neves has given a press conference this weekend, as the national team prepares to take on Bosnia for the U21 Euro qualifiers. And there’s been a reason to think he’ll be in different form this time. 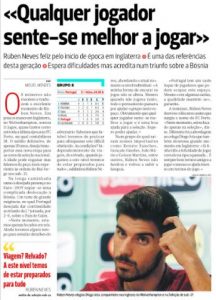 Since moving to Wolverhampton Wanderers this summer, Neves has made 11 appearances, which is a quite different situation to the one he had been living at Porto, where he sat on the bench for the entire season last year.

He was asked to comment on that, and said: “My way of facing games doesn’t change. Even I didn’t play that much, all my thoughts were about helping the group here. Obviously any player feels better playing and it’s a good help for the team. I hope I can help.” (via A Bola)

Neves didn’t want to talk about Porto, claiming that “at this moment, I’m only focused in the national team”.

His Wolves teammate Diogo Jota also spoke to the journalists, and had a word on their relationship: “I’ve already had the joy to play alongside him last season… It’s always good to have friends playing with you as and it helps a lot in terms of games.” 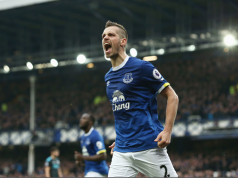