Ruben Neves has always received big attention from the Portuguese media. Being the youngest player to ever captain FC Porto has created some big expectations around him, since the club fans never stopped believing in his potential.

That’s why the move to Championship side Wolves was taken with a bit of disappointment by the local papers, despite knowing that his agent Jorge Mendes had a big part in the transfer.

But by saying he’ll be back to win a title with Porto one day, Neves makes sure he still has a place in the club’s heart. That’s the quote on O Jogo’s front page today, as he shows his love for his former side. 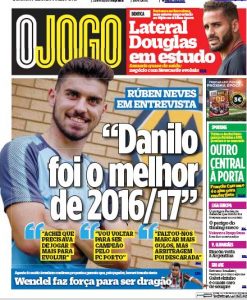 But he also spoke a lot about the Wolves move, especially regarding the things that changed in his life over the past few weeks. He was first asked if the project to be promoted to the Premier League in one season was what attracted him most.

“We didn’t define anything concrete about it, we are all doing the best to put Wolves where it deserves to be. This is a very competitive championship, with many games and we will all be needed, from the youngest to the most experienced.”

On Nuno Espírito Santo’s work to convince him to join Wolves, Neves said: “Yes, I spoke to him before agreeing to come, because I already knew him from last season. It was not my best season at FC Porto, I liked this project and the words of the manager, I felt that this was an excellent opportunity to evolve as a player. 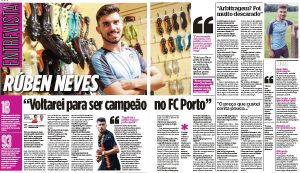 “I’m still very young and I know I have to continue to evolve as a player. Being at FC Porto playing very little for almost two years, I thought I needed to play to evolve more and I accepted Wolves in a blink of the eye.”

Neves was asked if Wolves is a good place to show his abilities to bigger clubs: “Yes, it will always be easier to get into the Premier League by being here. I’m focused on evolving and I’m on the right track for that.”

Finally, he talked about the pressure he has on him because of the price paid by the club: “I don’t even think about it… For a player it counts little, because when you arrive at a club what you want is to show the quality you have. I believe that I will not be crucified for failing a pass, especially in England, where people are very supportive.”