After making the promise to fans in England, the midfielder has now said the same to his home country’s press. Neves has given a long interview to Porto newspaper O Jogo on Thursday, talking a lot about Wolves’ promotion to the Premier League.

As always, the interview started with questions about his adaptation to English football, and the player was quite honest to say he never expected such an immediate success at the club.

“When I signed for Wolverhampton, I had good expectations because I liked the club project, but I never thought we would win the Championship in the first year,” Neves told O Jogo.

“Of course our goal from the start was promotion, but we played an excellent season and we were champions with two fixtures left to the end of the league. This is a championship that is usually very competitive.” 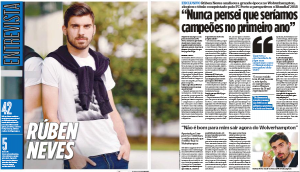 Then O Jogo mentioned that his name has been linked to clubs such as Liverpool and Tottenham Hotspur, and asked if he ‘admits’ the possibility of leaving Wolves in the summer transfer window.

“Right now it’s not good for me to risk a way out. I feel very good at Wolverhampton, I have no reason to leave because I’m going to play in the best league in the world. The fans already know me, the club too and everyone knows what I can do for the club.

“I spent a great year there and I love playing at Wolverhampton. Therefore, I have no interest in going out, because it’s the best for me and for my future.”

Quizzed if he doesn’t want to take the same risks as André Gomes, João Mário and Renato Sanches, he said: “I do not go there, because they are completely different situations. These players went out to excellent clubs and they had already affirmed themselves in the clubs where they were. These are excellent players who can play in any club in the world.

“I came to evolve as a player and now that I’m maybe in the best phase of my career it would be a very big risk changing club. This is the right path.”