Home Europe Ronald Koeman fires back to Dutch media: “These people have to sell...
SHARE

Ronald Koeman is in something of a public war of words with Dutch referee Bas Nijhuis. The Everton manager and Nijhuis clashed after the official was in charge at Goodison Park for Lyon’s Europa League victory.

Feeling Nijhuis had been unfair during the match, Koeman made his way to confront the referee afterwards. Nijhuis, who has a reputation in the Netherlands for saying what he thinks, wasn’t prepared to simply take a barrage from the Everton boss and answered back, later revealing what he said.

On Saturday, Nijhuis was quoted by De Telegraaf as saying: “He wanted ten minutes of injury time. Then I said, ‘If we’d had 15 minutes you wouldn’t have scored’.

“He didn’t like that and then walked away. I just added time, no problem. He has to save his own back, but to blame the referee…”

Koeman hasn’t taken this very well, which isn’t a huge surprise, and is quoted by De Telegraaf answering back: “I think that’s the worst. That does not fit his referee role. I 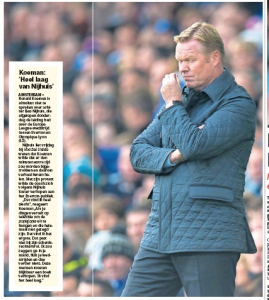 would say, go into your container, whistle your matches and do nothing else. These people have to sell books. I think it’s very low.”

The Everton manager’s arrogance at a referee daring to answer back, albeit in a way which slightly mocks Koeman, won’t win him many fans.

If Koeman is so prickly and can’t take it back, then he shouldn’t dish it out in the first place, and shouldn’t have seen Nijhuis as his first port of call for blame after the Lyon match.

Perhaps it’s easier to speak to the Dutch media and take pops at a referee than to face up to the much more pressing issue he has in England.