Portuguese newspaper A Bola says the club only want a loan deal, since spending much on a left-back isn’t part of their plans. 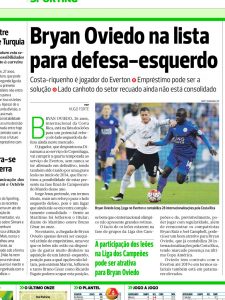 Sporting would believe that in addition to Champions League football, Oviedo’s compatriots Joel Campbell and Bryan Ruiz would be something that would attract the player to the club.

There’s no information on what would be Everton’s response to the offer. A Bola claims that the 26-year-old’s wages are quite high, which should mean Sporting would want the Toffees to keep paying for part of it.

Oviedo has a contract with Everton until 2018. The player who signed from Copenhagen for €4.5m in 2012 hasn’t been much used by the the club, for various reasons, having made only 14 Premier League appearances last season.