Home Europe Rodrigo pictured with Orta at airport as they fly in to complete...
SHARE

Despite a few grumbles from the Valencia media, and a Spanish politician describing Leeds United as ‘the English Huesca’, Rodrigo Moreno is on his way to sign for Leeds United.

Spanish newspaper ABC have pictured him at the airport as he flies to England to complete his move to the Premier League club. The attacker, who is signing from a cash-strapped Valencia, is being accompanied by Victor Orta on the flight.

The media were waiting for the pair, and both ABC and La Vanguardia are carrying videos of them entering the airport.

As of yet, there’s no indication which airport they’re flying into, but on Wednesday it was reported they could fly to London first and then travel onwards to Leeds. 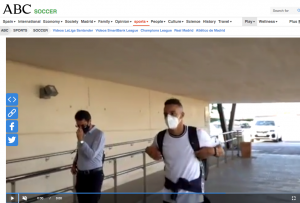 Valencia expect to receive €40m in total for the transfer, and that figure is made up of a flat fee of €30m or €35m, depending on who you choose to believe, with the rest payable via bonuses.