The wonderfully named Rocco Commisso is chairman of Fiorentina, and he’s given some hints on what he thinks of the club’s potential January business, with La Viola being strongly linked to Patrick Cutrone.

Quoted by Tuesday’s edition of Corriere dello Sport, Commisso, the billionaire founder of Mediacom, said: “I told Pradè (Daniele, the club’s sporting director) that I don’t want people for only six months, but people to help out.”

That would suggest Fiorentina would be looking at the Wolves player as a longer term option, so would want a purchase in any signing.

La Nazione, a Florence based newspaper, backs that up. Talks are expected with Wolves today, or tomorrow at the latest, and the agreement is already ‘well defined’.

Fiorentina would take Cutrone on loan for the rest of the season and have a mandatory purchase clause of €15m. Therefore, whatever happens, they’ll have to pay Wolves in the summer. 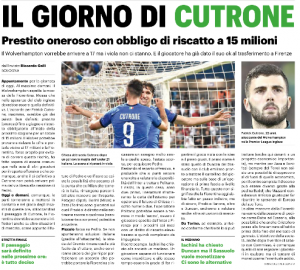 This is just a way of the Serie A side spreading the cost over a longer period.

Wolves are pushing for €17m, although it’s not thought that the talks have a serious chance of failure.