Italy manager Roberto Mancini has spoken to the local media today, with an exclusive interview for RAI Sport.

The boss talked a little about the players who could still join the national team squad, and had some words about Everton’s Moise Kean.

The striker hasn’t been in Italy’s first team for a while now, and although Mancini claims not to have forgotten about him, he makes it clear that his situation with the Toffees isn’t helping the 19-year-old to get a place in the squad.

“I hope he can find a club that puts him in a position to always play: if so, he is one of the players who can come to Euro 2020, but it depends on what he will do from here to May,” said Roberto Mancini (via Calcio Mercato).

Signed in a €27.5m deal from Juventus last summer, Kean has only made eleven appearances so far. He’s come off the bench in most of these matches, and is still to find the net for the Toffees.

The striker has three caps for Italy, but after being late for a training session, he was sent back to the U23’s and hasn’t returned to the main squad since. 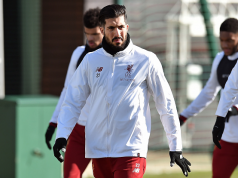