Club Brugge’s rising star Charles De Ketelaere has been warned against making a move to the likes of Chelsea, as he won’t develop at the club.

De Ketelaere is the big promise of Belgian football, having established himself as the star man for Club Brugge since his debut in November 2019.

Since that point, he has scored 11 goals and registered 14 assists In 89 appearances for the first team, an impressive tally for a player who is yet to celebrate his 21st birthday.

He is very much considered a star of the future and has been earning rave reviews for his performances this season, in which he has four goals and four assists in 18 games so far.

All of the big clubs in Europe are thought to be keeping a close eye on him, with Chelsea likely to be among them.

They’ve got a well-established history of signing young talent, particularly from Belgium, having brought in the likes of Romelu Lukaku, Kevin de Bruyne and Michy Batshuayi in the past.

None of those players made it at the club, though, instead needing moves elsewhere before establishing themselves as top-level players, at least in the case of Lukaku and De Bruyne.

And former scout Urbain Haesaert believes that should be something the youngster looks at, advising against a move to the likes of Chelsea.

“Whether a departure is a good thing, I doubt it,” he told Het Laatste Nieuws.

“My principle has always been that you are only a real first division player after two successful years at the highest level. Charles is a very big talent, but he still has to develop.

“If you go to a big club now, you should see the names there. Then tell me in whose place you are going to play.

“Of course, his agent wants to take him to AC Milan, Real Madrid or Chelsea, but from the bench, you can’t possibly develop. And that would be very unhealthy for his career.

“If I were Charles, I would tell my agent: ‘Give me the PSG eleven on paper, you know them. And tell me who I am going to play out of the team.’ 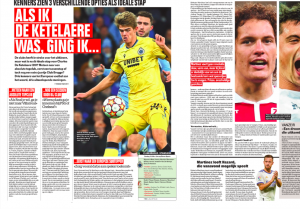 “That also applies to Ajax, which would be a very good club for Charles, given the philosophy and style of play.

“That’s why I advise Charles to stay at Club Brugge for another season. It’s a very good club, which is performing fantastically. You know you’re getting better, and you’re playing. The accommodation is great, and there’s a good crowd.

“The young players who recently left Belgium early for a top club… Just look at who is playing for them. Put them in a row.”