Leeds United fans know only too well that a good start to the season means absolutely nothing if the end objective isn’t met. Indeed, it can serve to increase the pain come the Spring months of judgement.

Last season saw a great start followed, all too quickly, by the club’s title, then direct promotion, then play-off challenge falling away, and that added to years of previous disappointment means the hopes of fans are somewhat controlled.

But it’s hard to stay calm when Marcelo Bielsa, hero to several of the world’s top managers, rolls into town and gets his show going quickly. Things are looking good right now but, speaking to France Football, Angus Kinnear realises there are big challenges ahead.

Asked if Leeds are seeing the evolution of Bielsa’s impact, Kinnear said: “The rest of the Championship will be intense. There are richer clubs than Leeds, with stronger squads. Marcelo is the first to say that nothing is done. Moreover, he declined the trophy of ‘the coach of the month of August’. He wants to be judged in May 2019, not before.”

There’s every chance Bielsa will expect to be backed during the winter transfer window, and Leeds will be under pressure from their fans to do so.

The manager will have good arguments given he’s already upped the club’s profile, which will help commercial deals, and also helped sell season tickets, as Kinnear explained: “The Bielsa effect made it possible to sell four thousand additional tickets. Everyone wants to see us play. Our next eight games have been chosen for broadcast.” 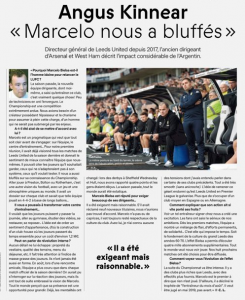 Kinnear also explained that since arriving at Leeds he’s learned the size of the club, and that it needed a big character like Bielsa to take on the responsibility: “The Championship is an extremely difficult competition. We needed a creator with the strength and charisma to take on the full burden, and a man who would not be overwhelmed by the stakes.”

Twelve Championship games out of forty-six have been played, there’s a long road ahead.