Barcelona were forced to come from behind to settle for a 4-4 draw against Villarreal on Tuesday.

The front page of Thursday’s edition of Sport claims the La Liga winners are planning a ‘revolution’ as they want to remodel their central defence following their latest league tie and signing Ajax’s Matthijs de Ligt is a ‘priority’ for them.

As a part of the ‘operation new defence’, the Blaugrana are looking for a partner for Gerard Pique. Samuel Umtiti was one player who went on to ‘fit like a glove’ next to the Spaniard, but the World Cup winner’s injury woes have been a problem for his continuity this season.

It’s claimed the Catalan club are planning to have four central defenders who will be tied to the club long-term and they are Pique, Umtiti, Clement Lenglet and De Ligt.

The former Manchester United man’s contract at Camp Nou runs down in 2022 and he has no plans to leave the club anytime in the future. The two Frenchman are tied to the club until 2023, meaning if De Ligt joins them, the centre-back position remains secured at least until 2023.

Thomas Vermaelen will leave the club after his contract expires in the summer, while Jeison Murillo is set to return to Valencia after completion of his loan spell. 19-year-old Jean-Clair Todibo could be sent out on loan to continue his development.

Though there have been reports of Umtiti’s future being uncertain, Sport states the Spanish champions have faith in the 25-year-old.

The Barca leaders will have a peace of mind and the above plan will only work if they secure the services of De Ligt. Another report from the same publication takes a look at the progress made by the European giants in their efforts to sign the 19-year-old.

Earlier reports explained that Ajax want the teenager’s future to be resolved before the Champions League quarter-final clash, but that looks unlikely now and Sport explains Barcelona’s idea is to secure the transfer before the end of this month.

For the deal to take shape, De Ligt’s OK is pending as Barca are already designing the whole operation with the player’s agent Mino Raiola, and have already left little room for negotiation with Ajax after making an offer close to €60m. 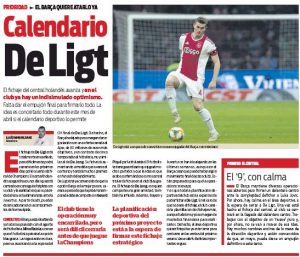 At the club, there is an ‘undiminished optimism’ over the deal.