Following a 3-0 victory over Liverpool at the Camp Nou, Barcelona fans sensed they already had one foot in the Champions League final.

However, their hopes were crushed when Jurgen Klopp’s side registered a 4-0 win in the second leg of the semi-final at Anfield on Tuesday.

‘Revolution’ is splashed across the front page of Thursday’s Mundo Deportivo as they look at players who could be signed, players who could leave and also a decision on Ernesto Valverde’s future, which will be decided after the Copa del Rey final against Sevilla later this month.

There’s a detailed story on how the squad for the 2019/20 season will look and the Catalan newspaper goes over those who could join the Spanish champions in the summer.

Having already agreed a deal with Ajax for Frenkie de Jong, the Blaugrana shifted their focus to Matthijs de Ligt. 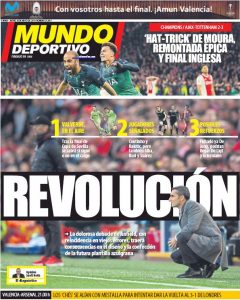 It’s claimed the Netherlands international defender is a ‘strategic signing’ for Barcelona as he’s expected to be a long-term replacement for Gerard Pique.

De Ligt’s desire is to join the Spanish champions and the contacts have been advanced, but they still have to close the deal with his agent Mino Raiola.

Barcelona paid €75m plus €11m in variables for De Jong and De Ligt should cost them same as his compatriot.

Another player Barcelona want to land is Antoine Griezmann and the Atletico Madrid forward’s name is in ‘pole position’. At the club, they’ve been made aware of the World Cup winner’s regret for rejecting the Catalan side last summer.

The Frenchman’s release clause will drop to €120m from July 1st, and Mundo believes the price tag seems affordable.

For the aforementioned players to arrive, some of the current players must go, and Ivan Rakitic and Philippe Coutinho are two players who ‘could leave’ in the summer.

Paris Saint-Germain wanted the midfielder last summer and the Croatian, ‘very tempted’ by Inter Milan, has been asking for an improved deal from Josep Maria Bartomeu, which has still not arrived. 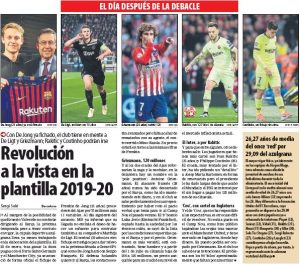 Mundo claims the Brazilian has a market in England and if Barcelona sign Griezmann, he will take Coutinho’s place in the squad. The problem to offload the former Liverpool man is his €90m asking price.