Home Europe ‘The revenge will have been all the sweeter’ – French newspaper delighted...
SHARE

December 13th 2017 is a date Claude Puel will likely cherish for the rest of his managerial career.

After getting sacked by Southampton at the end of last season despite helping the club reach the EFL Cup final, only just losing to Manchester United, the French manager landed on his feet rather quickly at Leicester City, where everything has been going well.

Five wins, two draws and a loss (to Manchester City) in his first eight games have helped the Foxes shoot straight back up the Premier League table, and Wednesday night’s 4-1 victory over Southampton at St Mary’s was a big statement. 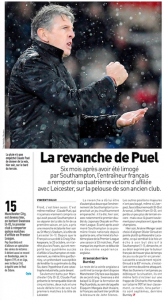 Explaining recently he still wasn’t entirely sure why Southampton ended his contract, Puel has always refuted claims from fans he played boring football, and L’Equipe explain the ‘revenge will have been all the sweeter’ due to the manner in which his team tore Mauricio Pellegrino’s side apart.

Choosing to replace him with the Argentinian manager, the Saints haven’t exactly fared any better this year, currently sitting three places and eight points behind Leicester City in the table in 11th, having scored 10 fewer goals than the Foxes.

Personally, we reckon Claude Puel, when he got home after the game on Wednesday, sat down on his sofa, took a nice long sip of his glass of red wine and, with a smirk, thought “Who’s the boring one now?”