Home Europe ‘Respect is respect’ – Manager not willing to ‘go to war’ to...
SHARE

Everton have endured a difficult run in the league this season, and have managed only one win since September.

A series of poor results convinced the Toffees to part ways with Rafael Benítez and two days ago, they confirmed he has ‘left the club with immediate effect’.

The Merseyside club are searching for Benítez’s successor and Belgium manager Roberto Martínez has been identified as one of the targets.

On January 17th, Het Laatste Nieuws reported the English club’s owner, Farhad Moshiri, has ‘no objection’ over bringing the former manager back to Goodison Park, six years after sacking him.

The ex-Wigan Athletic boss is currently contracted to the Belgium football association [RBFA], but that has not stopped the Premier League side from considering him for the vacant job at Goodison Park. 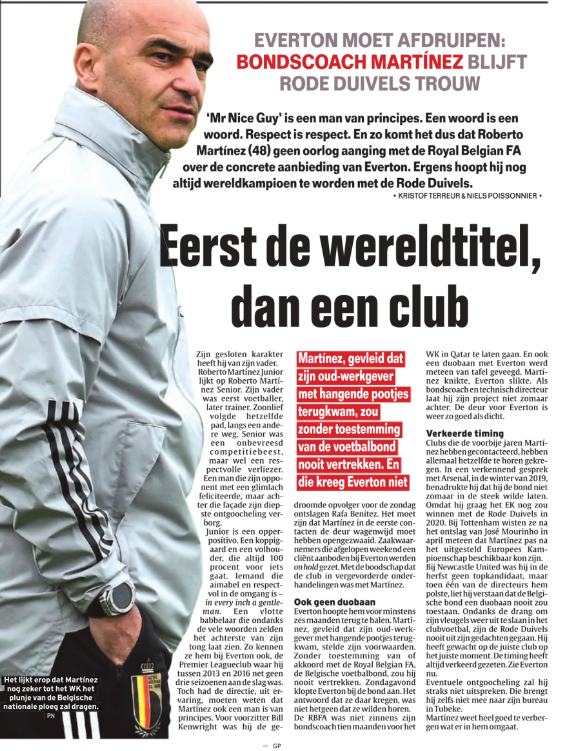 Another report from HLN today claims Everton chairman Bill Kenwright views the Spaniard as an ‘ideal successor’ to his compatriot. Agents of other managers offered their clients to the English club last weekend, but were ‘put on hold’ because they were negotiating with Martínez.

Everton hoped to bring their former manager back to the club, at least for six months. They even knocked on RBFA’s door on Sunday evening. However, the Belgian football association were not ready to let Martínez leave, 10 months before the World Cup.

The option to join his old club was ‘immediately swept off the table. Martínez nodded, Everton swallowed’.  The 48-year-old would never leave without the permission or agreement with RBFA.

HLN state the manager is a ‘man of principles’. ‘Respect is respect’ and he is not willing to ‘go to war’ with the Belgium FA over a ‘concrete offer’ from the English club.

Therefore, the door to joining Everton is ‘as good as closed again’ for Martínez.