Hamburg are such an entertaining club, if only for the drama, almost always negative, which surrounds them.

Currently 17th in the Bundesliga, joint on 17 points with last placed FC Koln, Hamburg are once again facing the very real threat of relegation.

This isn’t a new thing, Hamburg have never been relegated but have often found themselves in a mess and needed a hero to save them.

Hamburger Morgenpost go with a headline on Monday reading ‘For the rescue the rescuer is missing!’

Flirting with relegation for years, Hamburg have always managed to save themselves and Pierre-Michel Lasogga has been a hero before. 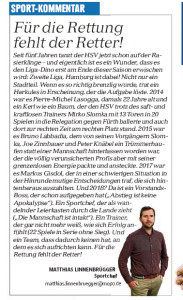 But the club kicked him out in the summer, sending him to Leeds United dressed very much as a failure and someone Hamburg could do without. The HSV curse has hit again and Lasogga has scored more goals in 2018 than the Hamburg team.

Scoring one goal in their past three games, and losing them all, the German club would give anything to have Lasogga’s 5 Leeds goals in 2018 under their name instead.

For Hamburg everything which can go wrong is going wrong, and if the club is under some kind of curse, then Leeds United are benefitting from it.