Milliyet claim Stoke City only managed to sign Badou Ndiaye in the closing stages of the window, following concerns about his work permit.

The Senegal international needed to play at least 1076 minutes of Senegal’s last 20 national team matches to gain a work permit, but he’s only played 567 minutes.

Stoke City then tried to convince the English authorities by saying the player has special talents, and they were investing a huge sum of money in Ndiaye. 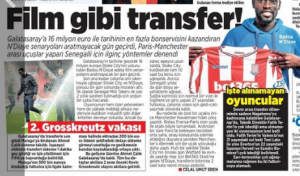 Ndiaye, meanwhile, travelled to England with a regular visa, but once his personal terms were agreed with Stoke City the player needed to get a special visa to take his medical.

The 27-year old was reportedly sent back to Paris, and once there were signs of his work permit being accepted Ndiaye then flew back to Manchester to take his medical.

The Senegalese midfielder eventually signed his contract with Stoke City just two hours before the deadline.