Ever since Sergej Milinkovic-Savic returned to Lazio from his holiday, the stories surrounding a potential move to Manchester United have died down a little.

The reason for that, at least according to Corriere dello Sport on Friday, is because Mateja Kezman, the midfielder’s agent, has yet to meet with the Serie A side to present them with potential offers he may or may not have picked up during his tour of Europe talking to clubs.

That means that, for now, the situation remains the same in that Lazio want €100m, which they know they aren’t likely to get from interested parties.

That’s why Milinkovic-Savic is hoping they do him a favour and reduce their asking price for his services a little bit. 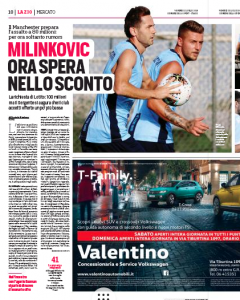 Corriere explain the midfielder has never hidden his desire of moving on, wanting to play Champions League and fight for ‘big goals’, but he also wants to thank Lazio for everything they’ve done by allowing them to make a lot of money from his sale.

Then, everyone is happy.

Il Messaggero, down their end, state that €85m could be enough to open negotiations, but €90m is the asking price.

There’s a brief mention of Manchester United being prepared to offer €80m, but it’s made clear that’s come from England, and Lazio have yet to receive any official offers for their star.

It really does seem that nothing will happen down the Red Devils’ end unless Paul Pogba is sold, and, as things stand, that seems somewhat unlikely.