Missing out on Cengiz Under two summers ago, Manchester City have remained interested in the young Turkish forward during his development at Roma, and this summer saw Corriere dello Sport adamantly state they would return to try and get him again next year.

In the meantime, a couple of other Premier League sides, namely Arsenal and Tottenham, have started being intrigued by the 21-year-old, and a few rumours about their desire to sign the forward have appeared here and there.

Cengiz Under himself stated towards the end of last season that he wanted to stay with his current club for at least another campaign, one he is currently enjoying, with two goals and four assists in his first eight appearances.

Well, there’s good news for Pep Guardiola, Unai Emery and Mauricio Pochettino, as Il Tempo in Italy believe Roma would be open to sell at the right price, and it’s not overly expensive, at least not in the current market. 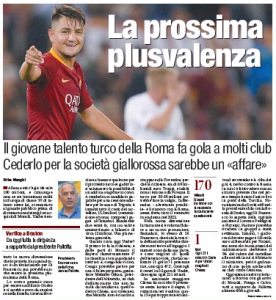 Having sold Alisson to Liverpool for around €70m, you’d expect it to be around the same ballpark, while it’s not far off, it’s actually less.

The Italian newspaper explain that a fee of around €50-60m would see Roma accept the bid, and Under would ‘pack his bags’ for his new destination.

Seeing as these are amounts two of the three aforementioned clubs (Arsenal and Manchester City) have shown themselves willing to spend on the right player, it wouldn’t come as a surprise if either the Gunners or the Cityzens open the chequebook to please their managers next summer. 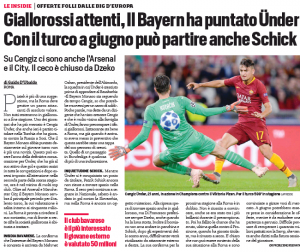 As for Spurs, they are yet to break the €50m mark, but if their plan is to keep up with the big spenders going forward, Daniel Levy will need to force himself to do so at some point or another.

Otherwise, they’ll just end up being left behind, and a repeat of the last transfer window will not go down well with the local fanbase. At all.

And just in case you wanted further confirmation about all this, Corriere dello Sport reiterate both Arsenal and Manchester City, as well as Bayern Munich, are well and truly interested in the youngster.