In July, Nabil Fekir joined Real Betis in a deal which could reach around €30m if all bonus levels are met. The initial fee the Seville club paid to Lyon was €20m, considered something of a bargain around Europe.

A failed transfer to Liverpool the summer before had brought doubts about the player’s fitness, and with his desire to leave the French club, Lyon looked for a solution.

At the same time, Betis were concerned about losing Giovani Lo Celso, with Tottenham making efforts to sign him. Signing Fekir protected the La Liga side against the impending loss, and perhaps even helped Spurs get a better deal.

Real Betis vice-president José Miguel López Catalán has been speaking to the Spanish media about the signing, and he believes Fekir could go on to surpass Lo Celso. 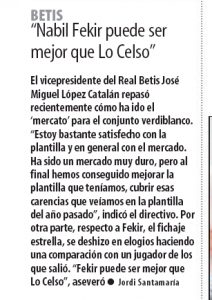 Quoted by Mundo Deportivo, he said: “I am quite satisfied with the staff and in general with the market. It has been a very hard market, but in the end we have managed to improve the workforce we had, cover those shortcomings we saw in the workforce last year. Fekir can be better than Lo Celso.”

That’s been seen by some in Spain as a little dig towards the Argentine. Lo Celso is technically on loan at Tottenham, but it’s widely expected the move will be made permanent next summer.