Despite spending around £130m on Harry Maguire and Aaron Wan-Bissaka, Manchester United are, especially in recent weeks, still struggling to keep clean sheets.

The Old Trafford conceded two goals to Aston Villa on Sunday, making it five in their last two outings after their 3-3 draw to Sheffield United, and while midfield and attack remain bigger priorities, if the opportunity to sign a world-class centre-back presents itself, it’s something they might consider.

One of the players who falls into that category is Kalidou Koulibaly, whom United tried to, allegedly, sign last summer, seeing a €100m+ bid turned down by Aurelio de Laurentiis.

However, according to Gazzetta dello Sport on Sunday, the reluctance to sell his star defender might be waning, and a door could be creaking open for the Premier League side to stick their foot in if they so wish.

The Italian newspaper claim that ‘if the same offer were to arrive, [de Laurentiis] would find it hard to return it to sender’. 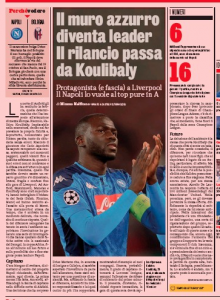 The Napoli owner is planning a complete revamp of his team, and the funds from a Koulibaly sale could go a long way to achieving that.

While it’s still speculation at this moment in time, it’s something worth keeping in mind for next summer, as we highly doubt either the Senegal international or the Serie A side would want to do a deal in January.