Birmingham City manager Harry Redknapp has been trying his best to persuade Guessouma Fofana to move to St Andrew’s. Currently with French club Amiens, the 24 year old has been attracting interest, and the Championship side are one of his suitors.

In their Thursday edition, French newspaper L’Equipe further push home claims that Birmingham City are keen and point out Redknapp’s telephone call to the player. The former England manager may have learned a little French, because there’s no talk of translators, just of Redknapp speaking to Fofana about Birmingham interest. 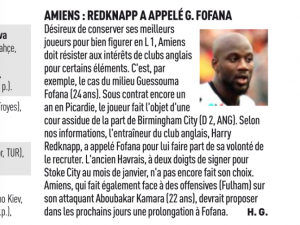 Either Fofana wasn’t convinced or didn’t understand a word Redknapp was saying, because L’Equipe say he hasn’t made his mind up yet, still unsure of where his future is best served.

Amiens don’t want to lose Fofana, and L’Equipe believe the French club will soon offer the midfielder a new deal. Fofana has just one year left on his Amiens contract, which may give Birmingham City hope of a value deal.