Portuguese newspaper A Bola today explains the reasons behind Christian Marques’ move back to Wolverhampton Wanderers.

The defender, who was loaned to Belenenses last summer and was supposed to stay there until the end of the season, has now been brought back without making a single appearance for the Liga Bwin side.

A Bola points out that the youngster had ‘even shown some quality’, but there were a couple of factors which led to his early departure.

Those were first Belenenses’ complicated situation in defence, where they can’t afford to make any gambles. Then there’s the fact he’s only 19 years old, and would of course require an adaptation period in the team. 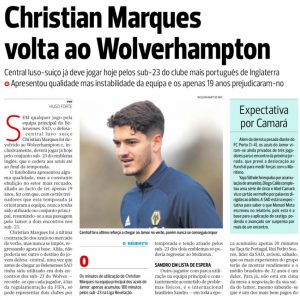 Three managers have been in charge of Belenenses this season, and none of them used Marques, so the best thing for him was to return to Wolverhampton.

That’s why the move was done and the defender is back to England, where he already featured in Wolves’ U23 clash against Burnley last night.

Marques’ contract with the Molineux side runs until 2023.