Fanatik report Trabzonspor loanee Alexander Sörloth has rejected a move to Tottenham Hotspur because he doesn’t want to be an understudy to Harry Kane.

The Norwegian striker, who scored 33 goals in all competitions for the Turkish club after arriving on loan from Crystal Palace last summer, has been heavily linked with both Tottenham and RB Leipzig in the past week.

It’s reported Sörloth doesn’t want to be second choice at Tottenham and he feels he can get more playing time under Julian Nagelsmann. In addition, the 24 year old believes it would be a good decision to play in a new league after his frustrating spell with Crystal Palace in the Premier League 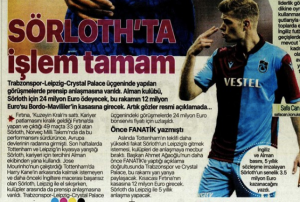 According to Fanatik, the German side will pay €24m for the forward and the money will be split equally between Crystal Palace and Trabzonspor.

Fanatik claim the deal should be announced in the coming days and the player will sign a five-year contract with RB Leipzig.