As things have gone quiet on Everton’s interest in Sporting midfielder Matheus Nunes, the Portuguese media brings a little information on this case.

Newspaper O Jogo today features a story talking about how well the player did in the couple of games he played this season, as his statistics show he’s been better than João Mário, who left the Lions for city rivals Benfica this summer.

The outlet then recalls that Nunes is still wanted abroad, as Everton are a club who’d like to take him to England. And they explain why the Toffees haven’t moved yet.

According to O Jogo, Rafa Benitez’s side can’t go for the signing before they make a sale. They point out that James Rodriguez, Fabian Delph and André Gomes are all ‘on the market’. 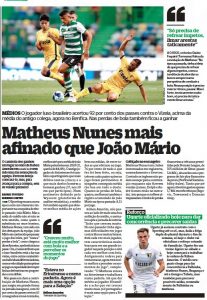 It’s said Everton have passed the limit of financial loss through the past three years, going over £105m, and are now stopped by the Profit and Sustainability Rules.

There was a time when the Portuguese media would say the Toffees were close to an agreement to sign Nunes from Sporting in a €18m deal. It’s been over a month since those claims, and even though we don’t really see something new on this saga, the interest continues being recalled in most stories about the Brazilian.